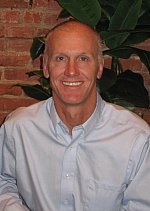 Mark earned a Bachelor of Science degree in Business Administration from California Polytechnic State University, San Luis Obispo, in 1986. His major was Finance with a concentration in Real Estate. Upon graduation, Mark obtained a real estate broker’s license from the California Department of Real Estate and began working as a real estate broker. For the next 31 years, Mark worked exclusively with commercial real estate, primarily in the City of San Luis Obispo.

In November, 2008, Mark opened Anderson Commercial Real Estate Services where he continues to offer the same quality leasing, sales, management and investment services. Mark has been involved with many projects in a capacity ranging from owner/developer, leasing agent and sales agent to property manager and consultant. He has represented many tenants throughout his professional career, including municipalities and corporations such as the County and City of San Luis Obispo, Wells Fargo, PG&E, Pacific Bell, Firestone Tires, and Tenet. In addition, he has worked with many local and national retailers including Trader Joe’s, Sherwin Williams, Aaron Brothers, Smart & Final, and Burger King.

Derek has been active in local commercial real estate since 1998, when he moved back to San Luis Obispo from Seattle to join his father Charley in the family business. Derek represents buyers, sellers, landlords, and tenants in all categories of commercial property on the Central Coast, with an emphasis on the San Luis Obispo market.

Derek is proud of his solution-based approach to customer service. Transactions can oftentimes be derailed due to solvable problems related to financing, environmental concerns, or contractual disputes. Derek has successfully completed many transactions which necessitated a comprehensive, even-handed, problem-solving approach.

Some examples of Derek’s successful transactions include:

Derek is fluent in Spanish, which he learned during a one-year foreign exchange in Quito, Ecuador, following his graduation from San Luis Obispo High School. In 1993, Derek returned to South America with a friend to bicycle through Chile, Peru, Bolivia, and Ecuador for six months on a self-supported tour of the Andes. He graduated in 1996 with a bachelor’s degree in Latin American and Iberian Studies from the University of California, Santa Barbara.

Derek has participated as a mentor with Big Brothers and Big Sisters of San Luis Obispo County and is a graduate of the San Luis Obispo Chamber of Commerce Leadership Class XII. He has also been the featured speaker at several service organization luncheons, including Rotary and the Exchange Club.

Derek’s hobbies include trail running and writing and recording original music (check him out on Spotify!) His wife, Melanie, is a lecturer in the English department at Cal Poly. They have two school-aged sons, Diego and Charlie, who both play piano, ukulele, clarinet, and saxophone. The family enjoys hiking, surfing, camping—and playing music!

Charley has been involved in all aspects of San Luis Obispo Commercial Real Estate since 1987. This includes leasing, sales, IRS section 1031 tax deferred exchanges, sales of raw land and development of land and commercial buildings. He has represented all types of tenants and owners including large national companies, non-profits, local businesses, local developers, governmental entities.

The effects of the Corona 19 virus has resulted in many calls from tenants and building owners asking for assistance and advice on how to deal with the economic impacts from the virus. Charley has had vast experience from past economic cycles. At the time of this writing he is dealing with these problems on a daily basis and as always, his goal is to find the best solution for all involved.

He has the ability to understand the dynamics of a transaction and find the economics, motivations and common ground to assure a completed transaction that meets the objectives of all parties. This is well demonstrated by the fact that he has represented the ownership of several large San Luis Obispo office, industrial and retail projects for years. He has provided long term tenants and excellent occupancy for the owners and maintains excellent relationships with tenants. He understands the unique nature of the San Luis Obispo market and the always changing needs of tenants and owners.

Charley has been actively involved with the local community. He served eight years as a member of the City of San Luis Obispo Planning Commission where he was elected  chairman for 2 years,  served several 2 year terms as a member of the San Luis Obispo Chamber of Commerce and after numerous years of service is a director emeritus of the Economic Vitality Commission (EVC) where he is still active.

Prior to moving to San Luis Obispo Charley was a partner at Michael Realty Company--- the largest commercial firm in Toledo Ohio. He previously practiced law as a partner in Senn and Treadwell in Seattle Washington. Charley obtained his Juris Doctor (J.D.) degree from the University of Toledo College of Law and practiced law in the states of Ohio and Washington. Prior to attending law school, he received a BBA with a major in marketing.

Charley and his wife Ginny have 3 of their 4 children and 7 of 9 grandchildren living in San Luis Obispo and have the opportunity to spend time with family on a regular basis. They enjoy hiking, pickleball, competitive bridge, golf and travel.

Some of Charley’s recent transactions include:

I’ve had a 25 year business  relationship with Charley.  He is personable, warm, ethical, and compassionate .  He has a knack for seeing opportunity often hidden to others. He is skilled at creating mutually beneficial, often creative business solutions that facilitate successful transactions.

Charley Senn and I have had a 25 year relationship.  It has been outstanding.  He started out representing a very good tenant and was very conscientious and did all the things I wanted in leasing agent.  After that, the next time I had a space come up I listed it with him.  He does an excellent job.  So, he has continued to represent me and eventually took over all my leasing even to tenants I had had before.  His current arrangement with Mark Anderson and Derek Senn has been excellent as well.

Since 2008, Daisy has been working alongside Mark, Derek, and Charley, managing the ACRES office. She is responsible for updating the company website, designing their print media, and posting on numerous real estate search engines and social media outlets. Daisy records the business’ financial transactions, reconciliations, and payroll. She is also a licensed California real estate agent.